The Myth of the True Story

“And I arrived on the coast of Mexico, the sole human survivor of the Tsimtsum, on February 14th, 1978.”

“I told you two stories that account for the 227 days in between.”

“Neither explains the sinking of the Tsimtsum.”

“Neither makes a factual difference to you.”

“You can’t prove which story is true and which is not. You must take my word for it.”

“In both stories the ship sinks, my entire family dies, and I suffer.”

“So tell me, since it makes no factual difference  to you and you can’t prove the question either way, which story do you prefer, the story with animals or the story without animals?”

Mr. Chiba: “The story with animals.”

Mr. Okamoto: “*Yes.* The story with animals is the better story.”

Pi Patel: “Thank you. And so it goes with God.”

For our book club at Avondale United Methodist Church we read Life of Pi, and some of us watched the movie Life of Pi the night before the book club discussion, so we could discuss both movie and book, and how topics were handled the same and differently between them.

One of the interesting discussion points, both in our book club, and in some online comments about the book, is the idea that the one story, the one without the animals, is the “true story,” and the one with the animals, is the “made up” story. As my wife Betsy so succinctly put it to me “They are both fiction. The book is fiction.” And yet people want to discuss which story is true and which isn’t.

This tends to show a couple of things. One is that the book pulled people in enough that, even knowing it is a work of fiction, they fall into the habit of talking about it as if it were a true story.

The second thing it shows is a bias in favor of “science” over “history”. People know that the story without animals has to be the true one, and the one with animals has to be made up. Mostly this seems to be because of the “floating island” that rescues Pi, and where he is almost lost.

This struggle of “story” over “reality” reminds me of another piece of fiction: The Silver Chair by C.S. Lewis. Jill and Eustace are in he underworld with Puddleglum the Marshwiggle, and they are in the presence of the Green Witch. They are trying to explain to her about the sun, and sky, and Lions, but the only way they can explain them is by use of examples from the underworld. To which the Witch says they are just making up stories, because they can only describe things by the things she knows. And they almost succumb to her enchantment, until Puddleglum puts out the enchanted fire with his foot, and the burnt scent overpowers the enchanted incense she was burning on the fire.

We are drawn to story, we naturally try to put life together in a story. We make science as much of a story as we make history a story, and myth a story. Perhaps the greatest fallacy of our age is the one that sees science as the “true” story, and trusts it to tell us about times and places where it has never been.

I tried to explain this at the book club — the limits of science. I could tell I was going over many heads. Let me try again here, with the below quotes from The Might of the West by Lawrence R. Brown (1963)

Scientific causality never deals with why things actually are as they are or happen as they do. It deals only with the mechanism of how they must happen if they do happen. But the wonders of modern science create the general impression that scientific causality undertakes to explain “reality,” and since nothing is more real than an actual event, it is an irresistible temptation to believe that this, too, is within the compass of causality. (56)

In the affairs of life, we deny all ability to make causal predictions about actual events, although oddly enough it is all the fashion to make causal predictions about nations, political movements or mankind as a whole… We do not consider the cause of this ship, this statue, this chemical experiment, though in ordinary conversation and in slipshod reasoning we often talk as though we did. With the problem of the existence of an actual thing or the occurrence of an actual event, Western scientific causality has nothing to do. It is a mighty science of what must happen in specified circumstances. But it does not and cannot predict the actual occurrence of these circumstances. It describes the mechanism by which all things that will happen must happen, but it leaves to political economists, astrologers and the readers of palms and tea leaves the prediction of what things are to happen. (247)

There was a recent debate between Bill Nye “the science guy” and Ken Ham, president of the Creation Museum on whether Creationism is a viable scientific theory. During that debate Nye explicitly denied Ham’s distinction between what Ham called Experimental or Observational Knowledge — which can be obtained through the scientific method — and Origins or Historical Science, which is not obtainable through the scientific method.

Now, Nye is a great proponent and well-versed in the scientific method and the results of experimental science and its benefits to mankind. What he is not, is a good philosopher, to understand the limits of various forms of knowledge.  For whether you believe in creation or evolution, the one thing Brown’s comments on science above show is that Ham is right when he says that science is limited in what it can prove. It is Nye, not Ham, using the slipshod thinking described by Brown above. It is Nye, not Ham, playing the role of “astrologers and the readers of palms and tea leaves” as Brown puts it, when he claims the scientific mantle for his “Theory of Evolution.” It is Nye, not Ham, playing the role of “snake oil salesman” by claiming more from his evidence than he allows.

Which leads me back to the title of this blog “The Myth of the True Story.” Is there, or isn’t there a true story? As a writer I believe in the truth of story, especially the truth of fiction. To illustrate, let me close with these lines from an episode of Star Trek: Deep Space 9: 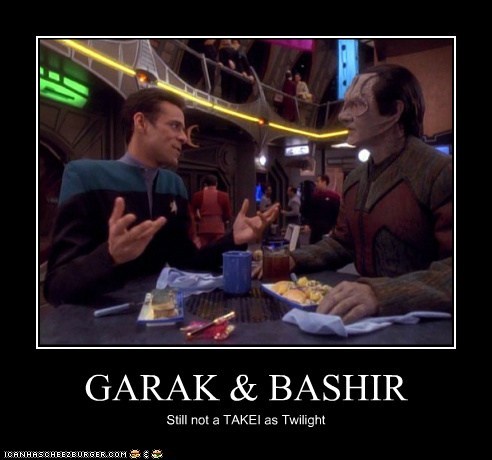 One response to “The Myth of the True Story”