Our schedule for touring the parks also had a few other events on it to be planned around. That is why we didn’t hit Carowinds in the Carolinas nor Dorney Park in Pennsylvania.  Our next park was on Saturday, July 8 in Vaughn Canada: Canada’s Wonderland.

We left Buffalo that morning, and with generally clear driving made it to the park around 11:30 a.m. (our greatest delay was the line at the border to Canada, where our passports all passed muster for entry.) The parking lot was big, and modestly full. There was no instruction on parking, and finding a good spot to park took a little time working our way through the rows of people stopping at odd spots instead of near someplace where they could park.

Canada’s Wonderland was designed on a similar model to King’s Dominion and King’s Island. The entry gate presents you with a view of an entry street – an international street – but unlike the other two parks, the street and its central fountain ends in a “Wonder Mountain” instead of an Eiffel Tower replica.

We entered the park, enjoyed the street, and had one of our first typically Canadian experiences. A gentleman who saw us there offered to take our pictures as a family, on the bridge across the stream, with the mountain in the background. Once we got our photos, I reciprocated for him and his family. 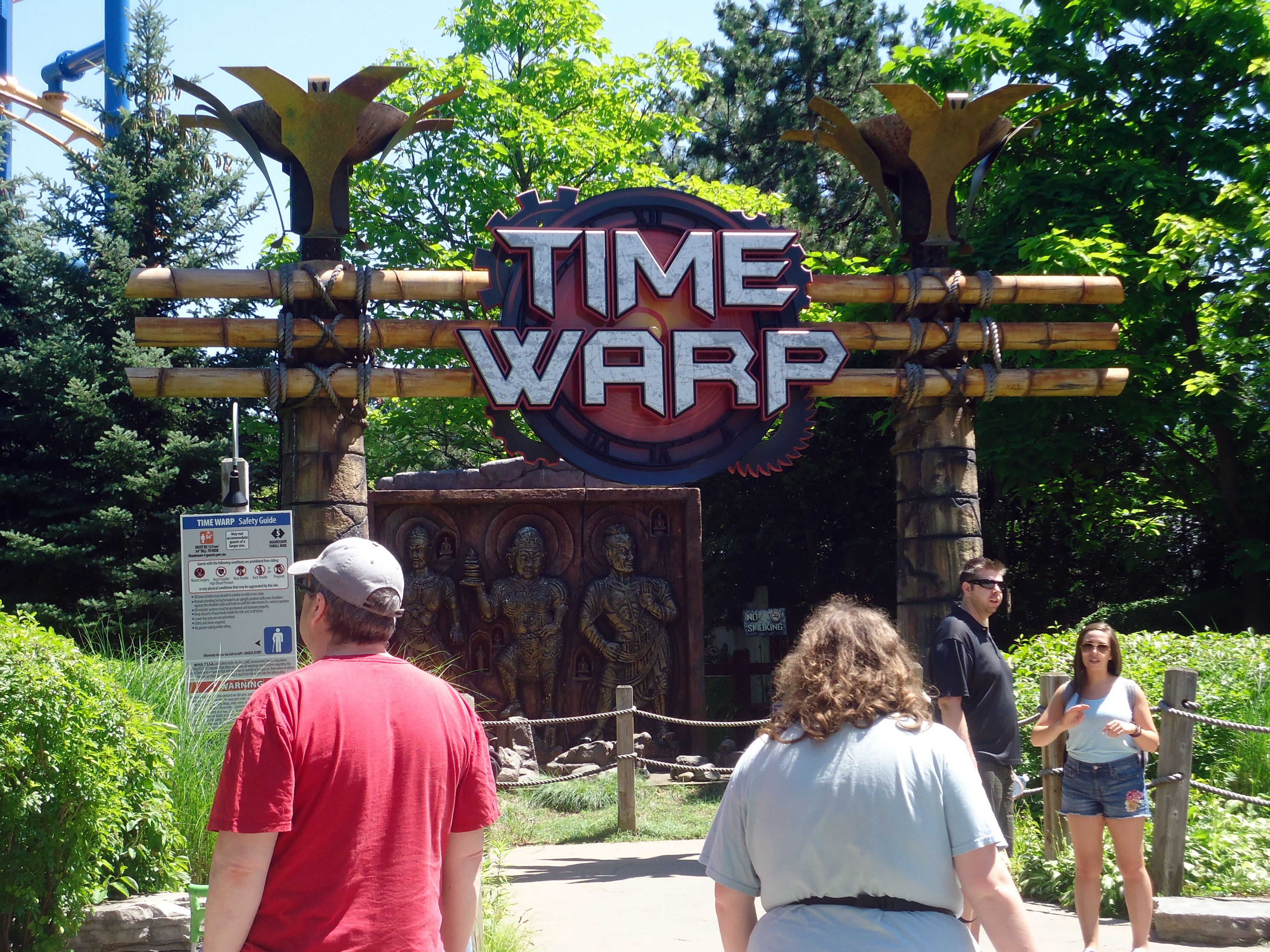 With that done, we went back down the street and started a clockwise rotation of the rides in the park that we were most interested in. Flight Deck was the first ride we tried. It was an intense ride, but not especially appealing to us. But what it did do, was give us a good view of the Time Warp, a ride where you go through the ride lying on your stomach in a prone position.  Besides the position you ride the coaster, it has an interesting circular mechanism that hoists you up a circle to start the ride instead of the usual first hill.

Among other rides that we hit were the Sky Hawk, which had wings you could orient to flip yourself over 360 degrees while flying.  Nathan and I came close, he more than me, but never quite made it over.  He was trying, I got so far and decided that was enough fun.

And then there was the Fly, our second experience with a Mouse Trap-style roller coaster. My favorite coaster was torn between the Time Warp and The Fly.

Starting a couple of hours after opening, we spent our time in the amusement park section, and didn’t get to the water park, so I can’t make any comments about it.  We had sort of looped one side of the park, coming back toward the Wonder Mountain, and I noticed the sign for the Victoria Falls Divers. We were about 30 minutes to the next show, so we decided to move on and do lunch.

Before we did lunch we went over to the International Buffet. Even on the food plan it has a $5 CAD upcharge per person, but we had seen it online and thought it might be interesting to do for supper When we got there, it was closed/reserved for a special function/group, and would open around 4 p.m. But they let me peak inside the door to see what it looked like, and I decided we wanted to try it for supper.

By this point we were hungry, and started wandering through the Medieval Faire section looking for lunch, and finding long lines.  We started a search for reasonable lines that led us into Planet Snoopy and a modest gem: Snoopy’s Suppertime. They served chicken fingers, grilled cheese, wraps and hot dogs, per the park program.  They also served mac and cheese. I had the mac and cheese with chicken, with was a large and satisfying sample.  The grilled cheese and turkey sandwich was ordinary but suitable, and the other two had hot dog combos.

After working through Planet Snoopy and Kidzville, we came out onto a plaza near a “My Canada” video show that celebrated the 150th anniversary of Canada.  Very few people were in the line, which was a shame, since it was a wonderful expression of Canada. Our only other comment was how many of the scenes, Canadians talking about themselves. Featured snow.

We then started a reverse circle around the mountain, and hit the Mountain Guardian and Thunder Run. The Thunder Run train was a fun fast ride that went twice around its short track.

The Mountain Guardian was the unexpected ride.  Its line snaked into the mountain, so you didn’t know how long it was, but it wasn’t a bad wait.  There was an explanatory video that I didn’t understand as well as I should. When we got into our cars, which were four seats back to back, two on a side, we had some osrt of light sensor guns in front of us, and used them at various points on the ride where it momentarily stopped or slowed down, to shoot various vr creatures.

The cars of 4 passengers traveled in pairs of two. Both Nathan and I got the high score (it was scored) for our car, though Nathan’s score was much higher than mine.  I just shot at anything that moved.  Afterward we discussed whether the coins got you points as well. I only know that it was hard to be certain where you were aiming, and whether it was you or someone else that hit the creature that disintegrated. But it was fun.

About this time we were headed by the Victoria falls again, near the time for its final diving show. We probably would have enjoyed any of the earlier shows better.  They wasted 5 minutes with dramatic music and talking before finally getting to the diving, and in that five minutes the sun had crept into the perfect spot to put glare in your eyes when you tried to look up at the divers.  Anticlamatic.

We then went over to the International Buffet. Only to be told they had closed the seating at 6 p.m., and the next would open at 7:30 p.m. So we wandered around a bit, finding the Dragon Fire’s obscured entrance, among other things, and then returned about 6:45 p.m., when we got in the forming line.

The guy behind us mentioned having been at the buffet several times in the year, and this being the first time he had ever been in a line.  So we waited about 45 minutes – our longest line of the day. But the international buffet was worth it. I recommend you check it out if you make it to Canada’s Wonderland.

All in all, a nice day, though if we had gotten there at opening, with time to try the water park section, it might have been an even fuller experience.

One side note to mention.  Canada’s Wonderland has something we hadn’t seen before on its soda-only stations.  Their Refresh fountains also had Freestyle machines at the same stop. Wish we had that back home!

I had been to Canada’s Wonderland once before, near when it first opened in 1981. The one thing my mother remembered most about the park was the log flume ride that we really enjoyed and rode several times.  I never did find it, and research afterwards confirmed that it had been near the park entrance, but was eventually replaced by the Flight Deck.  Not everything we remember fondly is always there when you go back.  Which is not a bad thing, just a fact. 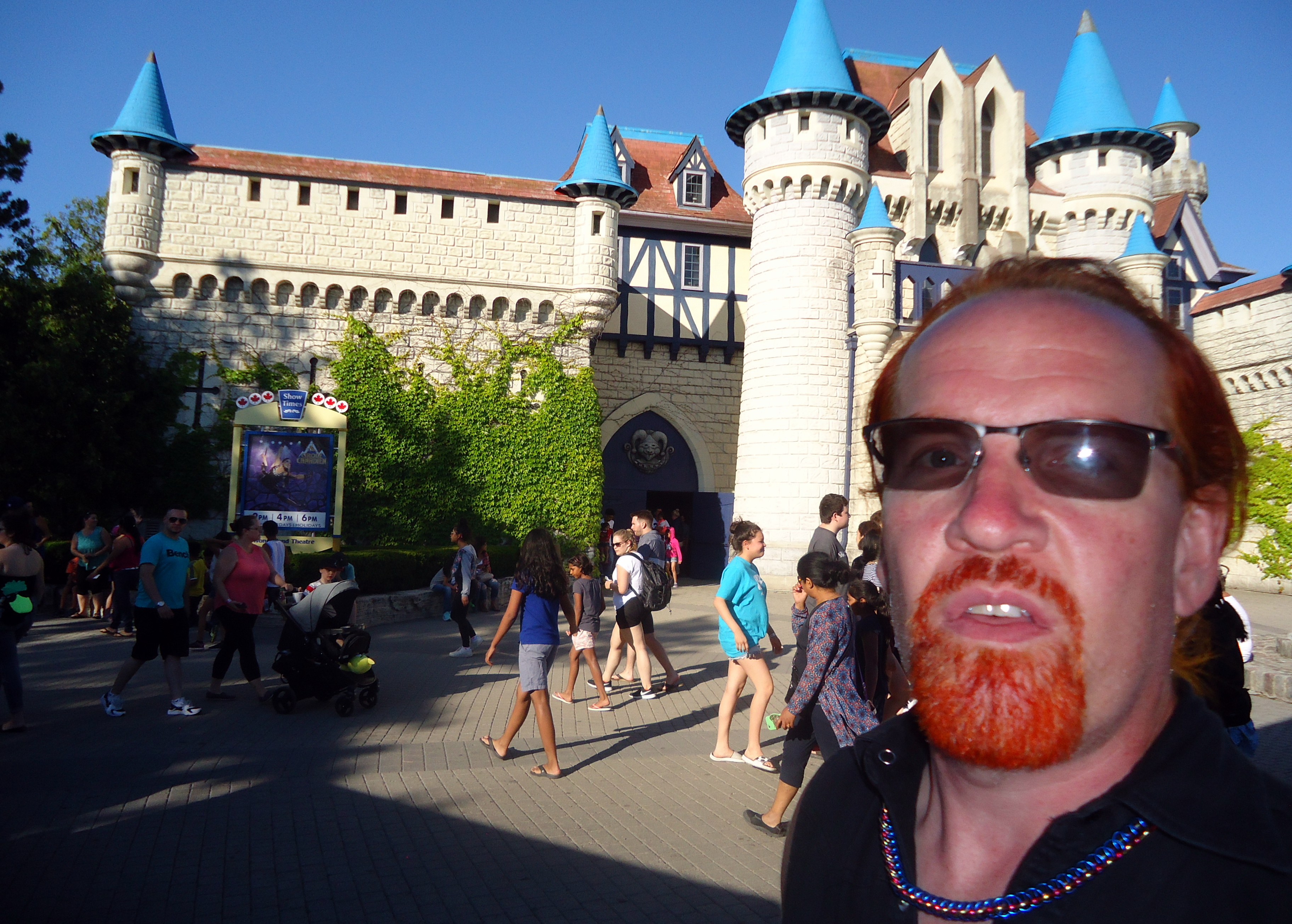