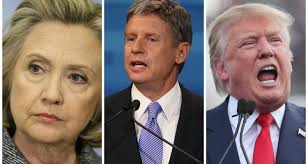 Today in the breakroom at work I walked in to see a “Breaking News” banner across the television: “Clinton say Trump should release tax returns.”

Where can you find a real issue in this campaign? Yes, I know it came up because of the 9/11 episode with Hillary Clinton’s pneumonia, but really, all the media time devoted to it.

I came home this evening and tried to search news about it: and found a glaring hole, at least in the news searches I could find. Story after story compared Trump and Clinton: their health, how they shared the news, their personal styles, the fact of their advancing age as presidential candidates.

But what they missed is that these two candidates are the decrepit dinosaurs of the race. Trump at least defeated candidates younger than himself. And one story claimed that if Trump won the presidency he would be the healthiest president we have had.

Except there is one candidate that is almost assuredly healthier than either Clinton or Trump, and yet this candidate does not show up in any of the stories. about presidential health This is the big hole.

The media is blaring stories about the the health problems of the presidential candidates, and not one that I found mentions the triathlete candidate: Libertarian Candidate Gary Johnson.

Back in 2012 when running for president, Johnson had an ad that ended with a shot of him at the top of the mountain he had just climbed. Johnson, at 63, is obviously more fit than Trump. Trump doesn’t do any sort of exercise besides campaigning and playing golf. Johnson has climbed Mt. Everest, run triathlons, and marched in the 26-mile Bataan Memorial Death March.

Trump during the campaign has constantly ribbed Clinton about her “stamina.” I don’t think he has the stamina to climb Everest. If we want a candidate with stamina, we need to think Libertarian.

Libertarians are fiscally conservative, socially liberal, and, in this case at least, the healthiest. 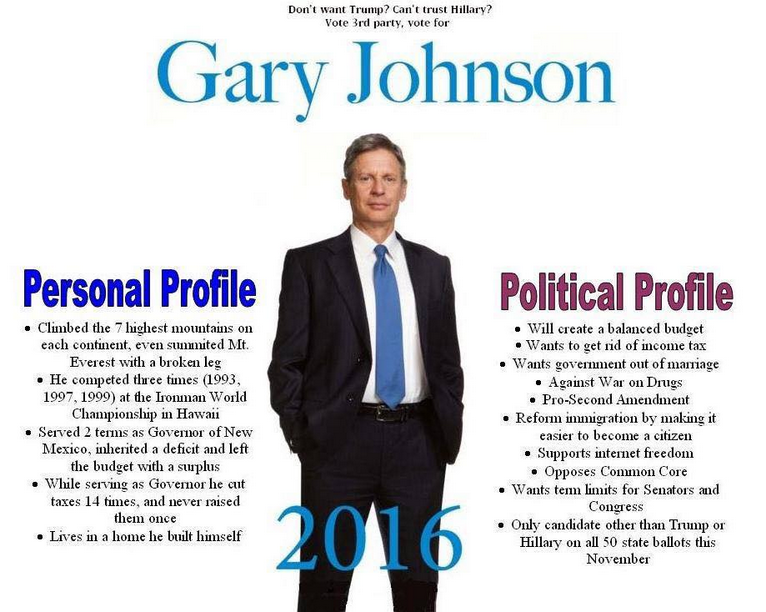